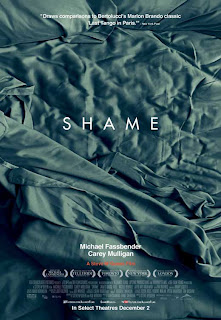 One of the most crucial scenes in Shame occurs right in the beginning. Our film's main character, Brandon Sullivan (Michael Fassbender), is innocently sitting on a New York City subway, minding his own business. Suddenly he does a double-take when he notices that a seductive redhead is sitting directly across the cart, looking right at him.

From then, the two spend minutes staring an one other, undressing each other with their eyes. We view the unnamed redhead from Brandon's perspective, as his eyes drift from her face to the laced stockings that cover her legs. Their fellow subway riders, meanwhile, go about their own business, oblivious to the sensual showdown occurring next to them.

If Shame was a romantic comedy, the scene would be endearing, with catchy, light elevator music playing in the background to entertain us. But the movie is an intense character study, and instead, we get dramatic -- almost sinister -- music playing in the background, suggesting some type of struggle. And there is indeed a struggle, and it exists within Brandon's mind.

Steve McQueen's (no, not that Steve McQueen) Shame is about a man with a sexual addiction. I say this scene is crucial because, right away, it introduces us to the daily happenings of Brandon's life, and sets the tone for the entire film. He can't even complete a simple task, like riding a subway, without being overcome with desire.

The film aspires, through a variety of different scenes, to show just how Brandon's addiction affects his ability to function in every day society. Off the bat, that ability seems fine, as we learn that the 30-something year-old lives in a high rise flat in the heart of the city. He has a good job, and he is single, while living an extremely private life. So private that no one he associates with is even aware of his sexual addiction.

In another early scene, we witness the advantages that come with Brandon's addiction. While at a bar with his boss, David (James Badge Dale) and other coworkers, David makes a drunken attempt to pick up a blond women who he deems is "gorgeous." We watch for a brief while as he attempts to court her, and then a couple of minutes later, Brandon steps in, and by uttering less than two sentences, he wins the girl. One of the biggest enablers of Brandon's addiction is that he both good looking and extremely suave.

While on a date with an attractive co-worker, we learn -- unsurprisingly -- that Brandon has no desire to commit to a girl. He tells his date that he does not believe in marriage, is in fact disgusted by the thought of it, and then he shares that the longest relationship he's ever been in lasted four months.

Brandon's life is then thrown into a tailspin when his sister, Sissy (Carey Mulligan) comes to visit. She is a very dependent, unstable women who has had trouble functioning on her own. Reluctantly, Brandon agrees to let her stay for a few days. Sissy often complains about how she never sees Brandon, and how he never returns her calls, notifying the viewer that Brandon's private life has also caused him to essentially sever all ties with his family.

While hosting his sister, he is unable to live the life that he needs in order to feed his addiction, and he doesn't handle it well.

As the film progresses, Brandon experiences a number of incidents that force him to confront his addiction -- each more severe than the next. It almost becomes painful to watch the things that Brandon does, not necessarily by choice, but out of need.

The film contains an abundance of nudity (mostly female, but some male as well), and even more explicit and sexual language, which makes it understandable that the film received an NC-17 rating. But McQueen, who wrote the script with Abi Morgan, and with the help of cinematographer Sean Bobbitt, presents the material tastefully and even artistically. Even during some of the sex scenes, the colors are so vivid that it feels like we're looking at a painting.

Shame is as clear cut a drama as you can possibly get. However, uniquely, the drama isn't between two or more people, but one. Fassbender, who worked with McQueen in his 2008 film, Hunger, plays the part brilliantly, portraying the internal struggle that lies within his character. At times, his addiction makes him feel on top of the world, but more often, it elicits a very different feeling -- one of shame.
Posted by Beyond the Credits at 7:21 PM